January 13, 2020
All over the world, countries have experienced various forms of political turmoil resulting in the destruction of property, and the loss of precious lives. Some of these developments have come about as a result of disagreements over issues that could have been resolved peacefully without torture and destruction. These have happened in parts of the world including Africa. The dictatorial tendencies on the part of some leaders have made it difficult for the ruled to be given freedom, liberty, respect and recognition. Due to the non-accommodations and non-recognition of the views of other people, especially political opponents, there have been a number of cases where disagreements have gone overboard and resulted in the outbreak of violence, torture, oppression, dictatorship and suppression.  It has therefore become necessary for countries to put down fundamental rules by which they have to be governed. This is meant to ensure that all issues that emerge are discussed in decent and acce…
Post a Comment
Read more

January 13, 2020
Years ago, people set goals for themselves as the clock ticked towards the New Year. As we prod into another new era, the old adage that, ‘life is lived forward but understood backwards’, comes to play. In this regard, the immediate responsibility in the New Year is to reflect on the issues of 2019. There were events of that year worth reflecting on to be able to draw lessons and make projections for 2020. Savings and security are two sides of the same coin. We do not just do savings for huge interest but savings with security guaranteed. This has not been so for many Ghanaians who got their huge sums of money locked up in some financial institutions such as MenzGold, Gold Coast Fund Management and the like. The economic crackdown did not only render many jobless but broke down businesses and tore apart hearts and homes. While government is making efforts to restore and pay customers who fell victims to such savings, we, as Ghanaians must learn that whatever is gotten quickly also go…
Post a Comment
Read more

The relevance or otherwise of 31st December Revolution

January 13, 2020
There is no doubt the success of the 4th Republican constitution is hinged on the 31st December revolution spearheaded by then Fit. Lt. Jerry John Rawlings. Upon announcing the overthrow of then-President Dr. Hilla Limann, Mr. Rawlings expressed optimism it would be the end of coup d’états in the country. True to his words, the fourth Republic has not been interrupted by any power-hungry soldier or politician. In fact, Ghana’s political history will not be complete without a proper analysis and diagnosis of events and lessons from the political struggle. It has been suggested that the 31st December revolution which had its antecedents from the June 4 uprising came to correct some negative tendencies that had undermined the country’s effective development. Some analysts justify the 31st December revolution citing the level of deprivation and hardship across the country in the early 1980s, a period corruption seems to have taken deep roots in the moral fibre of the country. In his addr…
Post a Comment
Read more

Can Strike Resolve Challenges In Institutions?

January 13, 2020
In recent times, Ghana, a God-fearing nation has witnessed a number of strikes by groups, individuals and institutions. These may have resorted to strike as a redress or panacea to a problem. One may ask whether the answer to a problem in an institution or misunderstanding among workers and management or a clarion call for attention for salary increase, book allowance, postings for employment, grievances over examination lapses, construction of roads and provision of social amenities is to embark on a strike. Strike is not the answer to any of the listed questions, it has never been the answer and it will never be the answer or the panacea to solving a problem or a dispute. This is so because after days or weeks of a strike it is finally called off and Life still goes on in the institution, community, church or what have you. Strike occurs both in secular institutions and also the church. There are instances where church doors are locked and worship is abandoned due to disagreements …
Post a Comment
Read more

January 13, 2020
My checks revealed that the national Broadcaster GBC is among the few media outlets that put in their bid for the broadcast right of the upcoming 2019/2020 Ghana Premier League. If this is true then honorable Minister of Youth And Sports and President of GFA, I think your work has been made easy on deciding who should be the broadcast right holders of the Ghana Premier League 2019/2020 season. Mr GFA President and Hon Sports Minister, the records are that only eight hundred thousand (800,000) out of over thirty (30 ) million people have access to digital boxes or decoders if you like, and on record, I also know that government is willing to sponsor the league which is very important. Mr President won’t it be equally important if more than twenty (20 ) million people or Ghanaians have direct access to a free to air TV ??? Ghana football is coming back after the negatives of #12. It is important to make it accessible to all Ghanaians but not to lock it on a decoder, hence GBC. Mr Presi…
Post a Comment
Read more 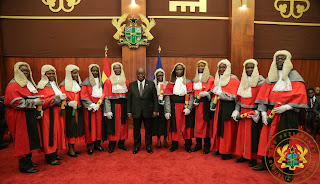 The President, Nana Addo Dankwa Akufo-Addo, on Tuesday, December 17, 2019, swore, into office, 45 Justices of the High Court and Court of Appeals, on the advice of the Judicial Council, at a ceremony at Jubilee House, the seat of the Nation’s presidency. 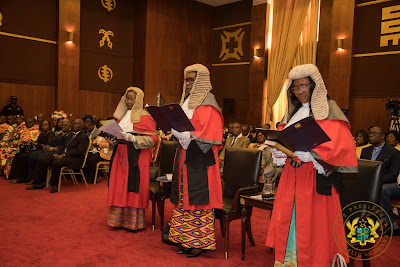 Ghana's President, Nana Addo Dankwa Akufo-Addo, has tasked Justices of the Supreme Court to ensure the strict application of the laws of the land, and do so without fear or favour, affection or ill-will, and, therefore, without recourse to the political, religious or ethnic affiliations of any citizen of the land.
According to President Akufo-Addo, “When anyone falls foul of the law, the society expects that the person will be dealt with accordingly, and the law enforcement agencies must ensure this is done. That is the true meaning of the concept of equality before the law. The Judiciary plays a central role in law enforcement, with the Supreme Court as the apex Court.”
The President made this known on Tuesday, December 17, 2019, when he swore into office Justices Mariama Owusu, Avril Lovelace-Johnson and Justice Gertrude Araba EsaabaTorkornoo, 3 female Justices who have been appointed to fill three vacancies on the Court as a result of the retirement of two Justices, namely, Justi…
Post a Comment
Read more
More posts